Royal Chance or Come and Work in England

Project „Royal Chance or Come and Work in England“ offers a great opportunity for unemployed young people aged 18-30 years from the Zlin region, who are registered at the employment office as jobseekers for 6 months and longer.

The participation in the project is a great opportunity for them to go abroad, gained new knowledge and experience that will make their position on the labour market much more easily in the future. Chosen participants will go on an eight-week work-placement in London, where they will have job working for pre-agreed employers, provided accommodation, social program and a support from mentors who will be ready to help and advice whenever needed during the whole stay.

This project is co-financed by European Union. 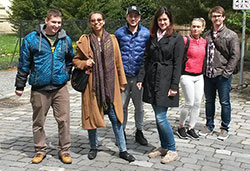 The third episode of the project Royal chance or Come and work in England is now over. Five of the young people from Zlín, Kroměříž and Holešov came back from London with the enthusiasm of the newly acquired knowledge and experience. They all worked in similar positions as their predecessors and most appreciated the opportunity to improve in English in a natural environment.

Some of the participants have already taken an active part in working life. One of the candidates has fulfilled her dream and works for the Czech Police. Another trainee went through retraining when he did a course on CNC machines, also under the project. Now he plans to move to Prague, where he would like to pursue a newly acquired profession. Also, worth mentioning is a trainee who set up a trade certificate and went to work as a plumber in Germany - he has worked in the same position in London.

The last group is already engaged in preparation, English courses, multicultural courses and general information meetings on living abroad. We now also have some new positions available so the participant will have a great opportunity to choose from more working places. They will be leaving for London in the second half of January.

Photos from the project - by clicking enlarge photo 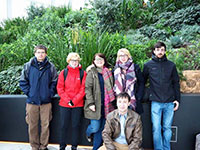 Na začátku dubThe second group of interns came back from London at the beginning of April. They all have mastered a new working experience perfectly and brought back a lot of memories for adventures and new experiences.

There were 5 young people in the group, all from Kroměříž. In London they worked in a nursery, in a Coffee shop, in administration and in advertising. The internship was not only an eight-week work experience, but also a rich cultural program in London provided by our mentors. The interns have returned satisfied, some of them are thinking about going back to London, to work and to live.

They all very much appreciated the preparation before they went to London as well as the care they got for the whole internship and the fact they learned how to act in a foreign environment and communicate in English. Now they will hopefully benefit from the gained experience and they´ll find a long – term employment.

We are now intensively working with the third group, which will travel to London as early as mid-May 2017. 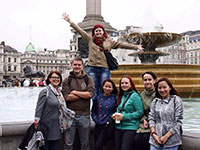 Project Royal Chance or Come and work in England is approaching to its half. The first group of interns have come back from London.

fared well there, gained valuable work experience, improved their English, many of them have found the direction of their future professional lives.
Meanwhile, another group of interns were prepared to the departure to London, where they will spend 8 weeks from February till April 2017. Workplacements are chosen according to the profile of participants, there are administration, marketing, catering and childcare represented mostly.
Project is being realized in Zlin region, the first groups of participants were selected in cooperation with labour offices in Kromeriz, Holesov and Bystrice pod Hostynem. .

The project may involve any candidate that meets the conditions of the international mobility program for disadvantaged young people, ie. age to 30 years, no more than high school education and the length register as a job seeker min. 6 months